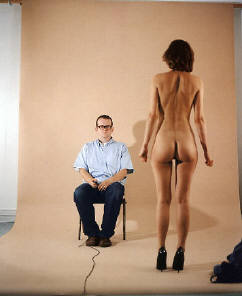 Jemima Stehli adopted the position of the stripper in her photographic series Strip, in which she questioned the designation of power in the art world within a voyeuristic framework.  She stands with her back to the camera in front of a seated male who is identified only by his job title, ‘Critic’, ‘Writer’, ‘Curator’ or ‘Dealer’.  A long cable-release is visible in his hand.  In each photograph Stehli is in a different state of undress caught in the act of stripping.  The precise moment the photograph was taken during this private strip is controlled by the seated male, his power doubled through the status of his job in the art world.  And yet, he is the pawn within Stehli’s game.  She has created the scenario; it is her concept, her intellect, her skill, and her body that she chooses to display.  She is active.  The seated male is unable to not look; he must play the stooge.  The photograph registers his level of satisfaction or discomfort: is that us, the viewer, looking at ourselves?