How does art respond to and extend our understanding of the showgirl?  I have put together some examples that explore woman-as-object (my interest is in showgirls, but this list is broader than that).  The idea for putting this together came to me whilst reading Katy Pilcher’s article ‘Performing in a Night-Time Leisure Venue: A Visual Analysis of Erotic Dance’.  In the paper, Pilcher uses photographs to elicit attitudes and opinions from the subjects of the photographs.  It reminded me of the approaches taken by artists: sometimes their works suggest a co-authoring between the subject and object, sometimes the subject in the work is further objectified, sometimes the role of the subject is embodied.  I have put this list together to try to show this breadth of approach.  The time period in which the works are created plays a role and I also noticed gender was a significant factor in the type of approach taken.  I shall start by presenting male artists.  I’m using the term ‘artists’ somewhat loosely, as there are practices here that belong to a photographic tradition rather than something more conceptually and critically engaged (that also reflects conversations in image-making, as the time-period of production also bears on the work made). 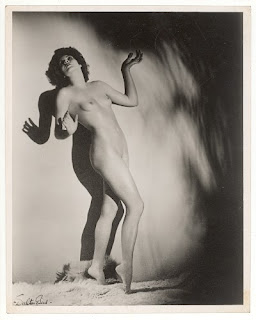 I love Walter Bird and I went to see his photographs at the archive in the National Media Museum in Bradford.  His photographs create an undisputable, enchanting glamour.  Sometimes I find myself wanting to reject all objectifying images made by men of women, but then, I see Walter Bird’s photographs, that are so powerful, respectful and glamorous and I cannot maintain that critical position.  Something complex more complex is going on.  Of course, in Bird’s photographs, Hollywood films of the 1930s and the associated film star portraits, women are constructed as glamorous goddesses in lieu of power either in the narrative or in society (see ‘Visual Pleasure and Narrative Cinema by Laura Mulvey).  However, this construction of woman-as-image now is a very different thing – can we create a new context for the images and reject the related powerlessness women represented at the time?
I’m not going to add them to the list, but the other image-makers that fit into this Walter Bird category of, shall we say, glamorously subjectifying women are: Guy Bourdain, Helmet Newton and Howard Hawks.  All worth looking at.